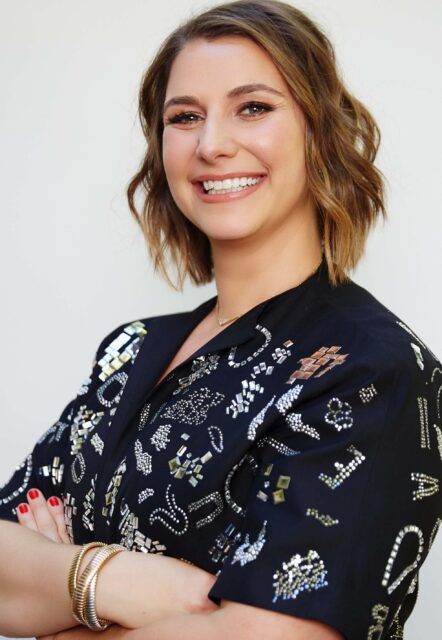 Alumni of the Decade
Cardozo School of Law, 2017

Next Generation of Philanthropists
Town and Country Magazine, 2016

“Telling stories in advocacy is not a new tool, but this issue and this moment need to be humanized and the stories are the way to do it.”

Emily Tisch Sussman has been at the forefront of executing strategy for the progressive movement in America for more than a decade. She is a leading democratic political strategist with over 250 appearances on MSNBC, CNN, Fox News, HLN, and CBS, and nearly 150 in the past year. Her views are also frequently featured in national news outlets including The New York Times, Newsweek, Reuters, and Politico.

Emily is the host of the popular politics podcast Your Political Playlist, which features all women guests, and is a definitive guide to the Biden-Harris administration and Congress. 2021 guests have included White House Deputy Chief of Staff Jen O’Malley Dillon, Biden’s Council on Economic Advisers member Heather Boushey and Acting FCC Chair Jessica Rosenworcel. Previous season guests included Speaker Nancy Pelosi, Hillary Clinton, and Stacey Abrams. The show has received several features on Apple Podcasts and Stitcher and was named one of Refinery29’s Best New Podcasts for 2020.

Emily’s January 2020 interview with Hillary Clinton made headlines in The New York Times, The Washington Post, POLITICO, The Hill, and several other outlets, driving a 48-hour news cycle in the midst of the Senate impeachment trial and the weekend leading up to the Iowa caucuses.

Her May 2020 live podcast recording with Senator Cory Booker at the 92Y was viewed by more than 70,000 people in 120 countries. The show was called “required listening for any Democrat” by the National Field Director for Swing Left and “an in-depth policy brief with context around the democratic evolution on these issues” by a national political reporter for a major news outlet.

In 2019, Emily launched ETS Advisory which allows her to work directly with advocates across the country to drive progressive change through legislation, advocacy, the electoral process, and policy development.

She has had the opportunity to provide counsel to organizations including Change the Ref, an initiative sponsored by March For Our Lives; Town Hall Project; the Baker Project, which is a part of Eleanor’s Legacy; Funny or Die: Glam Up the Midterms; and Vote Vets.

Emily is a member of the EMILY’S List Creative Council and has also served as a Senior Advisor to Swing Left, where she executed a national celebrity surrogate tour with Lin-Manuel Miranda, Natalie Portman, and Jessica Alba and coordinated the “The Last Weekend” project to mobilize key stakeholders in the final days of the 2018 midterm elections.

Previously, Emily held the role of Vice President of Campaigns for the Center for American Progress Action Fund (CAP), the largest progressive think tank in Washington, DC, overseeing issue campaigns to impact policies at the national and state levels.

She shaped key strategies to resist the Trump Administration’s harmful policies and turned up the heat on the Repeal and Replace debate as Republicans worked to dismantle healthcare for millions of Americans. She also worked with CAP’s youth outreach arm to cultivate young activists through Generation Progress and helped establish a Gun Violence Prevention Network.

Emily is a staunch advocate of women’s rights and helped shape the leading principles for the inaugural Women’s March in January 2017. She has extensive experience guiding young activists, having previously served as executive director of Young Democrats of America, and as founder of Think Blue, an organization to increase youth participation in the democratic electoral process.

She is a member of the New York Bar, earning her J.D. from Benjamin N. Cardozo School of Law. Key recognitions include the Cardozo Alumni of the Decade, New Leaders Council 40 under 40 Emerging Leaders in Politics, Washington Life Magazine 40 Under 40, American Association of Political Consultants 40 under 40, “We Are Emily” award from Emily’s List, and the Truman Values Award from Truman National Security Project.

A New York Giants fan and a life-long musical theatre enthusiast, Emily considers her experience as a camp counselor for girls in Massachusetts amongst her most fulfilling roles. She lives in New York City with her husband and three children.